In this day and age, social media marketing is a common buzzword. In the case of SMEs (Small to Medium-sized Enterprises) it also seems to have been adopted as an alternative to spending money on advertising.

Don’t get me wrong; social media can be an immensely powerful tool – if used correctly.

Unfortunately the vast majority of tweets & posts fall on deaf ears because they fail to engage the audience.

The chief concern among businesses trying to leverage social media is that they it is a full-time job. However, this doesn’t mean that automation in the name of efficiency is always king, either.

While it’s perfectly acceptable to not commit 100% of your time to managing your social presence (after all, presumably your business involves doing something else, too), that doesn’t mean that setting up a system of publishing and a format of messaging is going to get the job done either.

With social media, engagement is king.

That means the content needs to have three key attributes so that your audience will not only read it, but also increase organic followers, likes, shares, and views.

The leverage and power of social media is in the balance between the two.

At its best, your social profiles can raise awareness, spread your message, humanize you more than the next best alternative and ultimately, drive customers to your door.

Unfortunately, more often than not a half done social media plan is a self-fulfilling prophecy. Inconsistent and poor quality posting leads to lackluster response – which in turn leads to less consistency and effort in posting.

The result: An abandoned strategy that you might as well not bothered with in the first place.

So, does that mean that social media is only going to be ruled by those that use it already. Is it solely the domain of the young, fresh start-up or is there a simple entry point?

We’ve taken the essence of social media and boiled it down into three simple steps.

While this may not be a silver bullet in terms of overnight success, it should lead to steady increases in the most valued metrics.

1) Give Value On Social Media

This may sound obvious, but it’s surprising the number of businesses that only post funny pictures, only put quotes up, or even only retweet/share other people’s content.

While all of these aspects may well be useful as part of an overall social media strategy, too much of any one thing is rarely going to be engaging.

That’s doubly true if that one thing isn’t your own content.

Does this mean you need to spend time creating top quality images, infographics and user guides – not necessarily (although it would certainly help if you throw one in every now and then).

For instance, let’s say you are a plumber.

While it may be funny to see a video of plumbing gone wrong, to blend that with real value, why not write a quick blog post on the 5 most common signs that it’s time to change your boiler.

If you’re a restauranteur, why not send out pictures of your dishes and recommended pairings with the wines you offer. The image of the food might entice someone to come in and try the combination and bring along some friends.

No matter what the niche of your business or target audience, there are simple questions that you answer day in and day out.

Great content doesn’t have to take a longtime to produce as long as you….

2) Be Authentic On Social Media

Content created purely to get the audience to take a certain action (particularly making a purchase) will lead to either negative response or, most likely, no response at all.

Don’t claim to be an expert in something that you’re not, the audience will see through it and you’ll lose credibility.

But this goes both ways.

If you work for a professional, financial institution, don’t pretend to be really laid back.

If you’re company environment is more laid back, don’t pretend to be formal.

Since social media is a direct link between you and another person (who may or may not buy from you in the future), the best thing is to be as true to yourself and your company culture as possible.

In the case of most small businesses, the business owner will likely be active on social media. If that’s the case, use social media to share information that you would share with a customer one on one.

In fact, consider social media to be a one on one conversation – just with millions of potential eavesdroppers.

If you hear the same 10 questions over and over again from you customers, answer them on social media the way you would when a customer asks you directly.

If you’re in insurance, and there are lots of confusing terms and different types of insurance for different requirements, why not put together a simple guide or index of terms.

Chances are many people, both your customers and your competitor’s will have similar questions and will find your honest and open approach refreshing.

They may even come back to you and ask for more information. 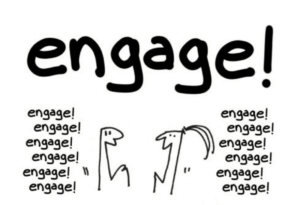 The word everyone seems to focus on in Social Media is the Media portion.

It’s treated like being on a TV show where you have the microphone and everyone else has to listen.

However, the more important word is ‘Social’. Social Media is a tool for human interaction.

Naturally, if someone asks you a question, simply reply with your best answer the same as you would in person.

However, social media (particularly Twitter) goes much further than that.

Twitter is one of the best search engines in the world. Simply type in any topic (or put a # in front of a keyword if you’re not sure exactly what to search for) and up pops a seemingly limitless list of interactions around that exact term.

For instance, if you offer Fire Safety Training for local businesses a quick search for #firesafety might reveal people asking for advice, asking questions and even asking for recommendations for exactly what you offer.

Feel free to engage these people, ask them more details about their situation, give advice and, if relevant let them know what you do and how you could help.

This can then go even a step further when you add these very same hashtag phrases to your own posts, helping to create authentic value and putting it where the conversations are already happening.

All of a sudden that daunting task of social media seems a lot more human after all.